Voices of All of Us: New York Participant Ysabel Abreu: A Profile in Perseverance and the Humanity in All of Us

As a member of the All of Us Research Program’s Community Participant Advisory Board, Abreu is a strong advocate and proponent: “I believe in the mission of All of Us to make visible people who have been invisible. Making people visible leads to better health outcomes.”

Perseverance has defined Ysabel Abreu’s life. During the pandemic, Abreu struggled to find an affordable apartment in New York City when her longtime East Harlem apartment had become too expensive. The search proved stressful and unnerving, but Abreu drew on strength and resilience cultivated after immigrating by herself from the Dominican Republic as a young adult.

In the early 1990s, at age 22, Abreu left her family and home on a student visa to the United States with hopes of higher education and better opportunities. She joined a fellow Dominican Republic immigrant who she had known in their homeland. Within months, she was pregnant and married. The nine months of gestation tested her fortitude as she survived a challenging pregnancy. Her baby was born with a neural tube defect, severe complications to the brain and spine, and died in her arms 15 minutes after birth.

“I felt like I had my heart ripped out of me,” Abreu said. She had barely recovered from the trauma or healed from the wounds of childbirth when she gave birth to a healthy son less than a year later. When her son was 2, she found a babysitter and began a 2-year college program. One of her professors was impressed with her academic skills and insisted Abreu continue onto a 4-year college track to get her bachelor’s degree. Her husband opposed her pursuit of higher education. They divorced when her son was 5. 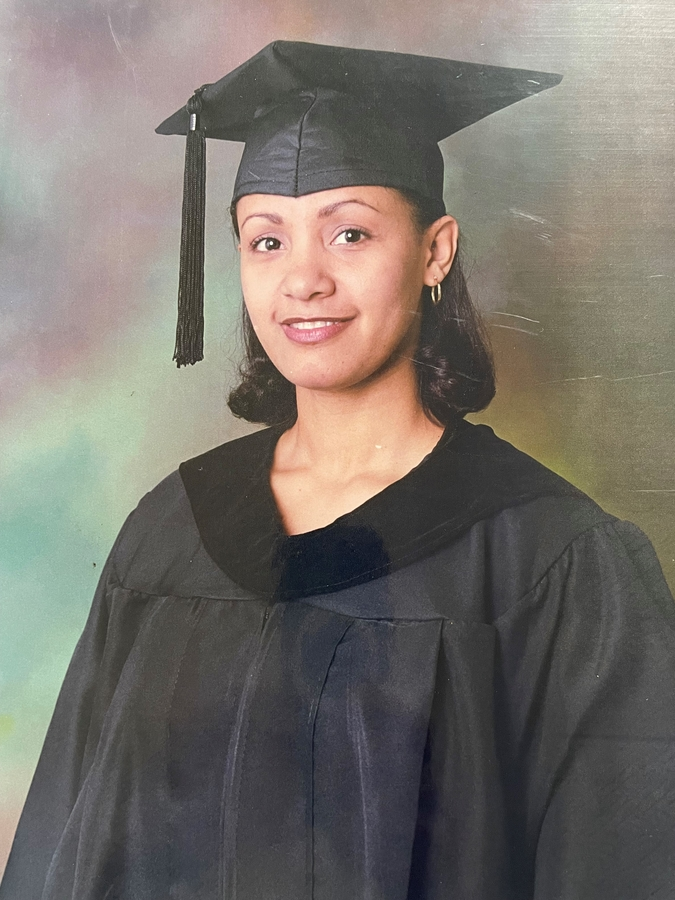 She worked nights to pay a babysitter and with support from friends and neighbors, who also helped care for her son while she attended classes, Abreu earned both a Bachelor of Arts and a Bachelor of Science degree from the City College of New York, and then completed her Master of Science in Education degree.

“My degrees are not mine alone,” Abreu said. “That is why I could never have a big head. My friends, classmates, professors, and neighbors were with me. I could not have done it without them.”

When her son was almost 10, Abreu was walking him down the street to the school bus alongside other neighbors and school friends. She was carrying his backpack, as well as her own heavy school bag when she tripped on uneven pavement. She fell, smashing her knee, unable to get up. Her neighbors rushed to her aid, calling an ambulance, and caring for her son while she was in the hospital. She needed knee surgery and spent several days in the hospital. Once home, the recovery was exhausting and again neighbors and friends helped her with food, basic health needs and childcare.

Abreu was finally able to bring her parents to America during the year she was healing from knee surgery. They have lived in her neighborhood ever since.

“Sometimes, it takes tragedy and pain to rediscover the humanity that we share collectively,” Abreu said. She will never forget the kindness and care from her community throughout her life in New York.

Abreu transferred the knowledge and training from her college degrees and the compassion and gratitude accumulated from years of community support and directed the skills back to her community. The neighbors who had bolstered her throughout her quest for higher education and the completion of advanced degrees became her primary beneficiaries. She became an outreach coordinator for Northern Manhattan Improvement Corporation, a non-profit community organization offering free services to residents of upper Manhattan and the Bronx. Abreu was based in the same “Spanish Harlem” neighborhood where she has lived for decades, helping neighbors access health care and navigate New York City’s extensive hospital and community health centers.

“My job was to break through barriers and help people either gain access to health care or get connected with services,” Abreu said. While working for the nonprofit, Abreu was contacted by an immigrant family from her homeland, the Dominican Republic. The father was undergoing cancer treatments and the family was afraid of applying for health insurance because they had overstayed their visa due to the health problems. They had sold most of their belongings to try to cover the extensive medical bills, Abreu said. She explained to the family that they could apply for emergency Medicaid given the critical cancer treatments. She helped the family submit the application, which was accepted, and did indeed cover the continued cancer treatments.

“Sometimes you are the only good thing that happens to somebody,” Abreu said. “You don’t know, but they know. People never forget how you make them feel.”

Maria Lizardo, LMSW, executive director of the Northern Manhattan Improvement Corporation, said Abreu’s passion fueled her work and was evident to everyone.

“Ysabel was someone who built a reputation as somebody who listens, who gets back to people and who offers solutions,” Lizardo said.

In 2019, Abreu quickly transitioned to a more high-profile political position, representing the Office of the Manhattan Bureau President Gale Brewer as a liaison between government and local communities in three districts in the Upper East Side and Harlem. She continues in the position connecting the community with resources and assistance.

Abreu insisted that often the solutions she offered were referrals to other organizations.

“One thing that I take a lot of pride in is telling people that I’m not a major organ in the body, but I am connective tissue,” Abreu said. “I’m always connecting people to one another and other organizations”

Joining All of Us

Through her community health outreach, Abreu became familiar with The All of Us Research Program. In 2018, when All of Us was preparing to launch nationally, Abreu was invited to join the program’s Participant Advisory Board, where she continues to serve. To date, 51,000 All of Us participants identify as Hispanic or Latino.

“I understand that our history has put us in a place that makes many distrust medical research,” Abreu said. “But at the same time, it has been through medical research that we as a collective humanity have been saved during this pandemic. I am part of this community that feels traumatized, but not participating will make you invisible.”

Abreu participated in testimonial videos sharing her perspective on why she joined All of Us and what she thinks the program offers communities historically underrepresented in medical research.

During the pandemic, Abreu was particularly impressed with the way the New York City Consortium shifted its focus from recruiting people to providing information and keeping in contact with current participants.

“What I love about All of Us is it’s grounded in the community,” Abreu said. “During the pandemic, All of Us focused not on recruiting, but on asking ‘how can we help.’ I was really happy to see the program become the good neighbor that people want to see.”

Elizabeth Cohn, Ph.D., RN, Associate Provost for Research at Hunter College, City University of New York is the Engagement Principal Investigator with The All of Us Research Program. Dr. Cohn cited the NYC Consortium staff for consistent outreach to more than 17,000 All of Us participants during the pandemic, providing information on food banks, testing sites, among the resources they offered.

“The All of Us Research Program redefines what research should and can be through its commitment to diversity and equity,” said Dr. Cohn. “The COVID-19 pandemic showed how responsive and resourceful the program was and is.”

For Abreu, All of Us gives people—often left out of medical research—a voice.

“I believe in the Program’s mission to make visible people who have been invisible,” Abreu said. “Making people visible leads to better health outcomes.”